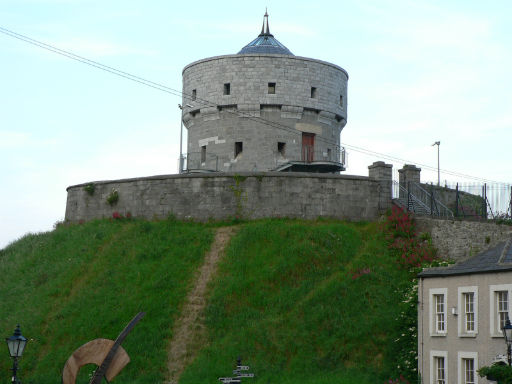 Drogheda's most striking feature, situated high above the town, the origins of the Millmount Fort are shrouded in legend. Some believe that the mound may have been the burial place of Amergin, a Celtic poet, but the Fort may equally have been a large pass

Millmount was fortified as a motte by the Normans in the twelfth century and a castle was later built on the summit. Cromwell met with his strongest opposition here during the siege of 1649, and the town's Governor, Arthur Aston, was killed here during th

The old fortifications were demolished in 1808 to be replaced with the present Martello-type tower. In the course of the Civil War of 1922, the fort was shelled from the town by Free State forces and seriously damaged. It has now been restored and in rece

Founded in 1974 by the Old Drogheda Society, Millmount museum hosts a range of exhibits including Guild and Trade banners stretching back two centuries; an industrial exhibition; a geological collection; a recreated 19th century kitchen; an archeological